The Myanmar Crisis is More Than the Rohingya

BANGKOK — In January of 1863, as the civil war in the United States neared its half-way point, southern Confederate soldiers in Madison County, North Carolina seeking to root out support for the northern campaign to save the union whipped two elderly women, shot a thirteen-year-old boy and twelve others, and then buried the men in a shallow grave.

The Shelton Laurel Massacre, as it became known, was one of the most appalling episodes of the American Civil War, but far from the only one. Today, the massacre is a little-remembered episode in a larger war that was defined less by its worst atrocities and more for the lasting legacy of division, distrust, and devastation that it wreaked on the entire country.

END_OF_DOCUMENT_TOKEN_TO_BE_REPLACED

If you walk the streets of this city at the end of the work day, you’ll hear a distinctive sound: the clicks and taps synonymous with Myanmar’s traditional sport, known as chinlone. Sharing certain roots with soccer, chinlone dates back 1,500 years, when it was played for the country’s royalty. While the objective is simple—kick the small woven ball around a six-player circle without letting it touch the ground—the game is difficult. Players leap and dive, executing complex footwork with a combination of dance and martial arts moves. Their athleticism is all the more remarkable given the competition: there is none. The groups of men and women who play nightly do so without any incentive to “win.” Victory comes in the artistry of the moves and the cohesion of the players. In chinlone, collaboration is the name of the game – which is deeply ironic when you consider the source.

END_OF_DOCUMENT_TOKEN_TO_BE_REPLACED

YANGON–Of all the great films about American politics, one that has stood the test of time is a 1972 classic about the triumph of symbolism over substance called The Candidate. Starring Robert Redford, it tells the story of an inexperienced son of a beloved political leader who is pulled into politics on the strength of his family name. Turning the general election into a popularity contest, Redford’s character encourages the media to play up the father/son angle, delivers a series of pleasant but empty speeches, and ultimately wins election to the United States Senate. In the film’s iconic closing scene, as screaming fans chase him on the way to his victory speech, the Senator-elect dodges the crowd, pulls his political consultant into a room and asks blankly, ” What do we donow?”

END_OF_DOCUMENT_TOKEN_TO_BE_REPLACED

What Myanmar Must Do To Free Itself of China

LONDON-Once a closed society, Myanmar, previously known as Burma, has emerged since 2010 as one of the world’s democratic hopes. But amidst the euphoria surrounding a seemingly miraculous transformation, American policy makers have missed one essential fact: Myanmar functions as at least five countries struggling to escape overlordship of a sixth. National reconciliation is Myanmar’s greatest need and should be, with an eye toward China, America’s Myanmar policy’s highest priority.

The struggle of non-Burmans for an equal place in the country and the opposition of ethnic Burmans is the story of modern Myanmar. Here is the chronology.

END_OF_DOCUMENT_TOKEN_TO_BE_REPLACED

Myanmar: No Ethnics; No Nation

by Stanley A. Weiss & Tim Heinemann

WASHINGTON – President Obama’s upcoming Saturday trip to Myanmar, the nation previously known as Burma, is intended to encourage the continuing democratic transition of what was once pariah state. But the way it is now structured may guarantee a lost opportunity instead.

END_OF_DOCUMENT_TOKEN_TO_BE_REPLACED

Getting Past the Symbolism of Aung San Suu Kyi

YANGON, MYAMAR—Few of us like to be reminded of mistakes made by heroes, particularly heroes of conscience.  Who among us remembers that Martin Luther King Jr. failed miserably when he tried to take the nonviolent strategies that worked so well in the segregated south of the United States to the industrialized north?  Who likes to remember that Nelson Mandela all but ignored the HIV/AIDS crisis raging across South Africa during his presidency, which eventually took the lives of millions, including his own son?

END_OF_DOCUMENT_TOKEN_TO_BE_REPLACED 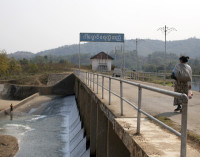 NAYPYIDAW Myanmar— Imagine for a moment what the United States would look like today if California, Texas, Florida, New York and Michigan had taken up armed rebellion against the U.S. government after World War II.  Imagine if the fighting continued for more than six decades, no matter who ran the government, right up until today.  And imagine how hard it would be for the federal government to convince investors that, despite the constant risk of armed attack, it was safe to invest in these resource-rich states.

END_OF_DOCUMENT_TOKEN_TO_BE_REPLACED

Ending Our Isolation in Asia

The recent release of Aung San Suu Kyi from house arrest, after deeply flawed elections that allowed the military in Myanmar, also known as Burma, to tighten its half-centurylong grip on the country, raises numerous political questions: What comes next for her? Will the ruling junta engage her newly reconstituted National Democracy Party? Will other political prisoners be freed?