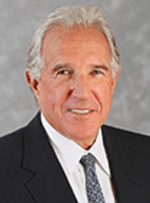 Stanley A. Weiss was formerly Chairman of American Premier, Inc., a mining, refractories, chemicals and mineral processing company. He is Founding Chairman of Business Executives for National Security (BENS), a nonpartisan organization of senior executives who use the best practices of business to strengthen the nation’s security.

Mr. Weiss has written widely on public policy matters, with articles in numerous publications including the International Herald Tribune, The New York Times, The Wall Street Journal, The Washington Post, and The Washington Times. His book, Manganese: The Other Uses, is the definitive work on the non-metallurgical uses of manganese.

A former fellow at Harvard’s Center for International Affairs, Mr. Weiss is the recipient of an honorary Doctor of Humane Letters from Point Park College in Pittsburgh, Pennsylvania. He currently serves on the Board of Directors for Premier Chemicals and is a member of the Council on Foreign Relations, the American Ditchley Foundation, the International Institute for Strategic Studies, and the Royal Institute in the UK. Mr. Weiss has served on the Board of Directors of Harman International Industries; the Board of Visitors of Georgetown University School of Foreign Service; and the Advisory Boards of RAND’s Center for Middle East Public Policy and the International Crisis Group.

Mr. Weiss is married with two children. He divides his time between his residence in London and his office in Washington DC.