The Ethnic Apartheid in Myanmar

Given the five decades it spent as one of the most repressive countries in recent history, it’s hard to imagine that Myanmar, formerly known as Burma, was once considered an empire. But 190 years ago this past March, after the Burmese Empire conquered two large Bengali territories across its western border and undertook a series of raids into British-held lands, the British Empire had had enough. British India launched a counter-insurgency that would drag on for two years and take thousands of lives. With some of the heaviest fighting concentrated in Islamic border communities, thousands of Muslims were forced to flee, eventually settling along frontier areas in India and Myanmar.

The Muslim families driven into Burma as a result of Burmese aggression — known as Rohingya Muslims — never left, despite being persecuted ever since. A grisly modern chapter began in 2012, when the alleged rape and murder of a young Buddhist woman in western Rakhine State led to mob violence that took the lives of hundreds of Rohingya over the next two years and saw 135,000 Rohingya held in squalid camps for their own “safety.” Seemingly oblivious to global concerns sparked by the persecution of this Muslim ethnic minority, the Myanmar government last week announced a repulsive new policy: All Rohingya must prove that their families have lived in Myanmar for at least six decades. For those we cannot, the penalty is either a refugee camp or deportation. For those we can, the prize is second-class citizenship, but with a catch: They must first renounce the term “Rohingya” and agree to be classified as a “Bengali.” It’s little wonder that more than 100,000 Rohingya have reportedly escaped Myanmar the past two years.

END_OF_DOCUMENT_TOKEN_TO_BE_REPLACED

The Islamization of Great Britain

“Your brethren who live in the east are in urgent need of your help . . . the Turks and Arabs have attacked them. . . I, or rather the Lord, beseech you . . . to carry aid promptly to those Christians and to destroy that vile race from the lands of our friends . . . Moreover, Christ commands it . . . All who die in battle against the pagans, shall have immediate remission of sins. This I grant them through the power of God.” — Pope Urban II’s “speech against the infidels,” at the Council of Clermont, France, November 27, 1095, according to the version of Fulcher of Chartres.

With those words spoken 919 years ago next month, Pope Urban II lit the fuse in a series of wars that would see the often violent deaths of hundreds of thousands, if not millions, of men, women, and children of the Muslim and Jewish faiths. While the First Crusade began as a campaign to take back the Holy Land from Muslim invaders, it would give way to six more major Christian crusades over the next two centuries. If it had been possible to conduct a global survey of non-Catholics between the years 1096 and 1291, the overwhelming majority of the earth’s population undoubtedly would have defined Christianity as a violent religion, whose holy book inspired zealots to brutally slaughter non-believers on the promise of eternal salvation. It also doesn’t take much to imagine how abhorrent Christianity would have appeared if the worst atrocities of the most zealous crusaders were played day after day on the World Wide Web.

END_OF_DOCUMENT_TOKEN_TO_BE_REPLACED

Cutting Off Our Nose to Spite Our Face in Myanmar

YANGON–One of them has helped reforest environmentally threatened regions and donated money to assist children with Down syndrome. A portion of every ticket his airline sells goes to social welfare organizations. And when Cyclone Nargis devastated Myanmar in 2008, his foundation contributed more than $8 million to rebuild schools, hospitals, and monasteries.

The other has footed the bill for school fees and medical expenses for the families of Myanmar’s political prisoners. He is actively recruiting doctors from other nations to improve the health care system here, and oversees the only national institution — the Myanmar football league — in which ethnic minorities participate on an equal footing with ethnic Burmans. And at a time when corruption threatens to derail this country’s nascent democracy, he is the highest-profile business leader to have opened his books to an internationally-respected accounting firm and then personally presented the full audit to United States Ambassador Derek Mitchell.

Which is not to say that Tay Za and Zaw Zaw, two of the most successful businessmen in Myanmar (formerly known as Burma), are Boy Scouts. Over the past two decades, the head of the Htoo Group and the 46-year-old chairman of the Max Myanmar Group built their vast conglomerates of companies — stretching from banking to hotels to construction — by thriving on connections they developed with a regime notorious for human rights abuses. Those contacts landed the two on the U.S. government’s Myanmar sanctions list, which bans American individuals and companies from doing business with any friends of the old regime.

END_OF_DOCUMENT_TOKEN_TO_BE_REPLACED

Rekindling Military-to-Military Ties Between the U.S. and Myanmar

Less than a month after this nation won its independence from Great Britain in 1948, the Communist Party of Burma declared war against the Burmese government. Fighting between the two sides raged for more than four decades. The beginning of the end came 25 years ago this month, when Communist troops grew sick of the fighting and mutinied against their own leaders. By mid-April, the rebellion reached party headquarters, where insurgents smashed portraits of Lenin, Marx and Engels before seizing arms and ammunition. Aging party leaders fled to China. After 41 years of fighting, the Burmese Communist Party disintegrated , “defeated not by shrewd Burmese tactics,” as historian Thant Myint-U has written, “but by the weariness of the local people.”

There is another actor who helped bring about Communism’s end in Burma, now known as Myanmar: the United States. From the moment Burma’s Communists first declared war against its government, America supported the Burmese army. In the early days , it provided emergency aid and easy-to-land planes flown in by U.S. war veterans. When Chinese-backed troops crossed the border and attacked the Burmese army in 1968, American military support grew to include shipments of weapons and military trainers for the Burmese Air Force. In the 1980s, the U.S. financed $4.7 million in military sales to Myanmar while paying for 167 Burmese soldiers to learn about democracy while attending U.S. military schools under the International Military Education and Training (IMET) security assistance program.

END_OF_DOCUMENT_TOKEN_TO_BE_REPLACED

How to Invest in Myanmar

by Stanley A. Weiss and Tim Heinemann

MYANMAR-For a nation that was frozen in place for half a century by a repressive military junta, it is ironic that the government of Myanmar (also called Burma) is charging that change is not happening fast enough. But that was the scene in November, when government officials seized a multibillion-dollar industrial project in the southern port town of Dawei for its owners’ failure to attract foreign investors in a timely fashion. To restart the project, which had previously been run by a Thai company, Myanmar appealed to government officials and private investors in Japan. The first to bite was the Mitsubishi Corporation, which agreed to build a large, coal-fired plant to generate electricity and kick-start operations.

In the middle of the Dawei drama, a local human rights group, known as the Dawei Development Association, warned Japanese investors that they risked becoming complicit in harming half a million minority residents in the area. The group charged that Myanmar’s government had forced thousands of poor farmers off their land “without fair or equal compensation” or “access to adequate housing or livelihoods after being displaced.”

END_OF_DOCUMENT_TOKEN_TO_BE_REPLACED

What Myanmar Must Do To Free Itself of China

LONDON-Once a closed society, Myanmar, previously known as Burma, has emerged since 2010 as one of the world’s democratic hopes. But amidst the euphoria surrounding a seemingly miraculous transformation, American policy makers have missed one essential fact: Myanmar functions as at least five countries struggling to escape overlordship of a sixth. National reconciliation is Myanmar’s greatest need and should be, with an eye toward China, America’s Myanmar policy’s highest priority.

The struggle of non-Burmans for an equal place in the country and the opposition of ethnic Burmans is the story of modern Myanmar. Here is the chronology.

END_OF_DOCUMENT_TOKEN_TO_BE_REPLACED

The Folly of Sanctions

Playing in theaters across the United States is a film called ” Upside Down, ” about an alternate universe where twin worlds sit stacked like bread in a sandwich, separated by opposite gravities. If our world could somehow have a similar twin, last month would have marked the tenth anniversary of Saddam Hussein’s willingness to abandon his nuclear program without a shot being fired. Headline writers would have sung the praises of the sanctions regime imposed by the United Nations, which compelled Saddam to abandon his push for weapons of mass destruction. Abu Ghraib would still be a little-known, nondescript prison on the outskirts of Baghdad. And 4,808 American soldiers would still be alive to celebrate birthdays, weddings and Little League baseball games.

END_OF_DOCUMENT_TOKEN_TO_BE_REPLACED

Hacking a Path Between China’s California and Myanmar’s Dracula

MANDALAY–Reading the news that the Chinese army systematically hacked into United States computer networks brought to mind another group of soldiers who engaged in an entirely different kind of hacking here seven decades ago: Merrill’s Marauders. What makes them most memorable is that it was one of the few times that American and Chinese soldiers fought on the same side against a common enemy.

END_OF_DOCUMENT_TOKEN_TO_BE_REPLACED

Myanmar: A Nation at War With Itself

YANGON — Towering high above the center of this ancient city, the Shwedagon Pagoda is one of the great wonders of the religious world. Said to be encased in more than sixty tons of gold, the Shwedagon is older than the city itself. Its earliest legend goes back 2,500 years, when two brothers from lower Burma are said to have met the Buddha shortly after his enlightenment. As proof of their friendship, the Buddha plucked eight strands of hair from his head, which they brought back and enshrined within the Shwedagon. There it remains, alongside the Buddha’s famous precepts, the first of which reads: “Avoid killing, or harming any living thing.”

END_OF_DOCUMENT_TOKEN_TO_BE_REPLACED 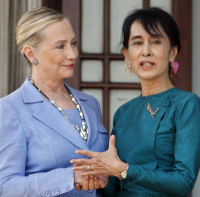